New Sentry SDKs should follow the unified API, use consistent terms to refer to concepts. This documentation explains what the unified API is and why it exists.

Additionally those SDKs were purely centered around error reporting through explicit clients which meant that certain integrations (such as breadcrumbs) were often not possible. 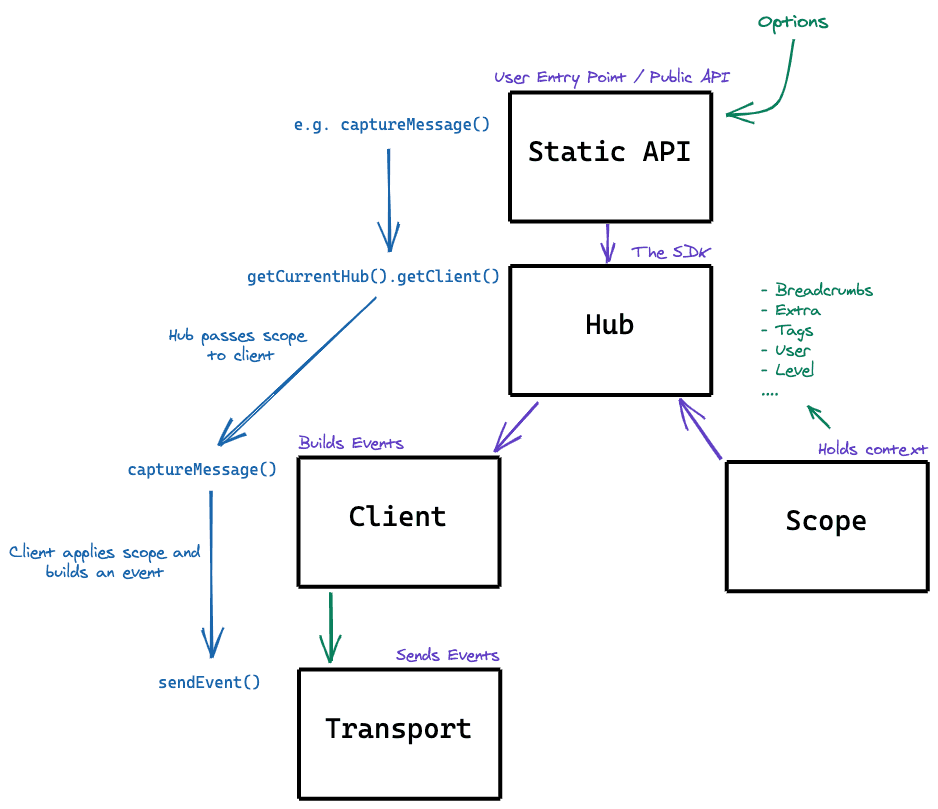 The static API functions is the most common user facing API. A user just imports these functions and can start emitting events to Sentry or configuring scopes. These shortcut functions should be exported in the top-level namespace of your package. Behind the scenes they use hubs and scopes (see Concurrency for more information) if available on that platform. Note that all listed functions below are mostly aliases for Hub::get_current().function.

Takes options (dsn etc.), configures a client and binds it to the current hub or initializes it. Should return a stand-in that can be used to drain events (a disposable).

This might return a handle or guard for disposing. How this is implemented is entirely up to the SDK. This might even be a client if that’s something that makes sense for the SDK. In Rust it’s a ClientInitGuard, in JavaScript it could be a helper object with a close method that is awaitable.

Calling this multiple times should be used for testing only.
It’s undefined what happens if you call init on anything but application startup.

A user has to call init once but it’s permissible to call this with a disabled DSN of sorts. Might for instance be no parameter passed etc.

Additionally it also sets up all default integrations.

All SDKs should have the concept of concurrency safe context storage. What this means depends on the language. The basic idea is that a user of the SDK can call a method to safely provide additional context information for all events that are about to be recorded.

This is implemented as a thread local stack in most languages, but in some (such as JavaScript) it might be global under the assumption that this is something that makes sense in the environment.

Here are some common concurrency patterns:

Under normal circumstances the hub consists of a stack of clients and scopes.

The SDK maintains two variables: The main hub (a global variable) and the current hub (a variable local to the current thread or execution context, also sometimes known as async local or context local)

A scope holds data that should implicitly be sent with Sentry events. It can hold context data, extra parameters, level overrides, fingerprints etc.

The reason for this callback-based API is efficiency. If the SDK is disabled, it should not invoke the callback, thus avoiding unnecessary work.

A Client is the part of the SDK that is responsible for event creation. To give an example, the Client should convert an exception to a Sentry event. The Client should be stateless, it gets the Scope injected and delegates the work of sending the event to the Transport.

Optionally an additional parameter is supported to event capturing and breadcrumb adding: a hint.

A hint is SDK specific but provides high level information about the origin of the event. For instance if an exception was captured the hint might carry the original exception object. Not all SDKs are required to provide this. The parameter however is reserved for this purpose.

An event captured by capture_event is processed in the following order.
Note: The event can be discarded at any of the stages, at which point no further processing happens.

Many options are standardized across SDKs. For a list of these refer to the main options documentation.

You can edit this page on GitHub.